This is an entry for Godot Wild Jam #5

Jam themes were: Natural Disaster or One Control

Our main pick was Natural Disaster but accidentally we made the games controls just one button, so... crossover theme :P.

Its the year 20xx, humanity is in the brink of extinction, after "ENIGMA II" super computer took control of all processing power on earth, it created a cascade effect with the spacial debris on earth orbit, so it rained fire ending with more than half of humanity, then it took control of all the climate control machines and bioengineered kaijus to hunt the rest of the survivors.
Our last resistance is in Island "SRC0451",
a secret scientific and military base, where humanity labs managed to replicate ENIMGA II's Kaiju engineering process and created "Crimson Danger" the plant kaiju defender of humanity, but that's not enough, the last power collector on the island need to collect energy to maintain the habitat system and to aid the kaiju in battle, the survivor don't have much to do in the middle of a climatic catastrophe they just run and help if its not risky, and lastly our hero a surfer with some kind of tribal ideology that think that riding the catastrophe he can tame it...

CONTROLS: (Just the left click)
You are in control of 4 units, to select a unit click over it, once selected click where you want to move it.

GOAL:
Each unit has a goal to accomplish and some skill but the ultimate goal of the game is survive until the surfer catches the wave break point (red percentage bar in the top right). The surfer and the survivors must stay alive!

NOTE:
If you win a game and replay it, the game time will be increased by 30 seconds, so every run will be harder than the one before.

Doomsday Surfer: Keep it in a quadrant to stop disasters from growing, but we aware after some time the surfer need to go to another quadrant. When the surfer stop a quadrant grow you can put a unit together with him if is a tile available to keep it secure for a while.

Power Collector: This machine purpose is to collect energy cells, once the energy bar (in the left) is complete a random quadrant of the map will be cleaned of all disaster. This unit should be the one that moves more.

Plant Kaiju aka "Crimson Danger": Move it over an enemy kaiju to kill it, an enemy kaiju will spawn and move randomly in the map, his next destination is marked with a red cross. 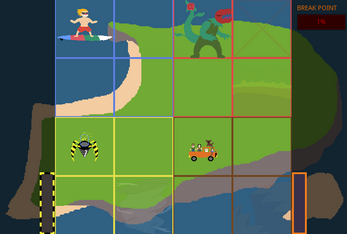 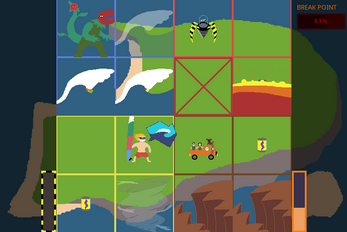 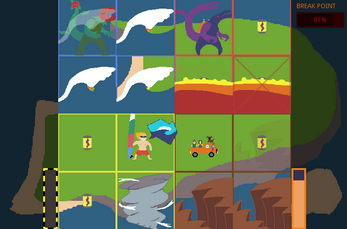